The Mauyra empire was the first known empire to cover over almost all of the Indian sub-continent. The empire exited for 137 years. It started out when the Nanda empire (the previous major power in the region) was conquered by Chandragupta Maurya. Eventually, it expanded its region and covered 5,000,000 square kilometers at its height with a population of 50,000,000 people (one-third of the world population at the time). Eventually it fell when its final emperor was assassinated by his general, who then established the next major power of the region- the Sunga dynasty. 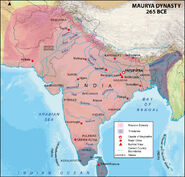 Add a photo to this gallery

Put some minor information about the civilization here.

Put some notable/good matches that result in the civilization's victory.

Put some notable/good matches that result in the civilization's loss.

Put some notable/good matches with the results still unclear.

Retrieved from "https://civilization-versus.fandom.com/wiki/Maurya_Empire?oldid=839"
Community content is available under CC-BY-SA unless otherwise noted.